Well,that’s us at the end of our second week in Willington,we’ve tidied up the last odds and ends that we needed to do and we will be leaving tomorrow,Tuesday.It’s been good here,we’re close to shops and pubs,we can get water and we can empty the loo,what more could we want? Now though,it’s time for a change of scenery.Since we left Trent Lock at the beginning of November,after our 50 hour service,it has been our intention to steadily make our way to Barton Under Needwood for Christmas.We knew that there were stoppages at some of the locks in between so that has been the reason for our somewhat slow progress.There are still a couple of stoppages still in front of us so we are only going up the T&M for a few more miles and there we intend to stay for another week or so.The stoppages are due to be completed by the 14th of December and we would like to be at Barton about the 22nd so we can spend our first ever Christmas with some of our Grandchildren,as well as our first ever Christmas on a narrowboat. 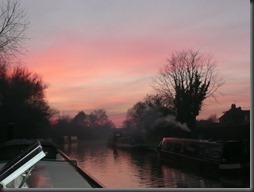 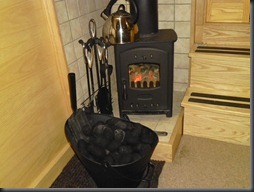 Sunset over Willington on the left and our cosy fire on the right.The fire hasn’t been allowed to go out since before we left Trent Lock on the 3rd of November,and the kettle is always on the boil,I have been known to enjoy the odd cup of tea.

This week here at Willington has been a relaxing one,with just a walk along the towpath for a mile or two on most days.On Wednesday though,we went by train to the village of Tutbury where I used to stay.We went to see an old friend and catch up on the gossip,sadly,I think that that will be the last time I go back,things change and we have to move on.Thursday had us going to the nearby marina to fill up with diesel and,as a result,I am very impressed with the fuel consumption we are getting from our Beta 38 engine.I keep a running total of our engine hours and since our previous fill up we had done 60 hours.I put 57.5 litres of diesel into the tank to fill it back up so that’s not bad at all,slightly less than a litre per hour.Most of the 60 hours has been spent generating electricity which works out at a little over two hours a day,again,not bad and we are also getting a bit from the solar panels. 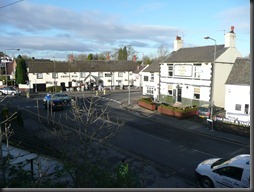 Willington village centre on the left as seen from the Railway Station,there’s another pub out of picture.On the right is Trent Bridge at Willington,now the floods have gone down,last week the water was above the arches.This bridge was built in 1839 and was a toll bridge,the old ford and the ferry that were used before this were destroyed so the only way across the Trent was to pay a toll.The villagers of Repton and Willington wanted the bridge but not the tolls,which were quite hefty and they finally got them lifted in 1898.

On Friday,now that the floodwater had receded and we could get across the River Trent,we took a walk to the nearby village of Repton,the one famous it’s school which was founded in 1557.Apart from the school there’s just a couple of pubs and a few shops,one of them being a butchers,so we got our meat for Sunday Dinner.We like to use the village shops when we get the chance because the produce in them is often better than that in a supermarket and not always more expensive. 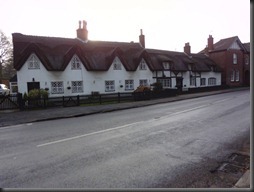 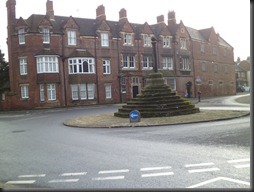 Above are a couple of pictures of the centre of Repton.

The weather is now starting to play a bigger part in our plans.On Sunday morning we woke up to find a covering of ice on the canal,and ice can have a big influence on our progress,because,if it gets too thick then we are going nowhere.It takes a few days of below freezing temperatures to make the canal impassable and,usually,any ice in a morning has disappeared by lunchtime,which is what happened on Sunday.It is possible to cruise through thin ice but there is a risk of the protective coating on the hull being damaged,allowing rust to set in,so we aren’t keen on doing that.The weather forecast for the next few days gives us above freezing temperatures so we should be ok for the next leg of our journey.There are the usual media generated warnings predicting the worst winter for a hundred years but that’s mainly to fill the gaps between the adverts,there’s never any evidence,just some “expert” we’ve never heard of.We intend to just move from one haven to the next anyway,when conditions permit,so moving like that means we shouldn’t get stranded anywhere without any facilities.

I caught this on Sunday,not bad seeing as I didn’t have any bait.On the right you can see me doing the dishes.Lisa cooks,I wash up,seems a fair way of doing things to me.

I tried my hand at a bit of baking today,something I’ve never done before.We had some of the Sunday joint left over,so we got some pastry from the local Co-op,I got the mincer out and I set about making a couple of pasties.Are we allowed to call them Cornish if I made them in Derbyshire? Buying the pastry seemed to be the best bet as trying to make pastry as well as pasties looked like a step too far for someone with my culinary skills.Anyway,the result was very good,they tasted as good as they look,believe me.I shall now have another go and the next time make my own pastry. 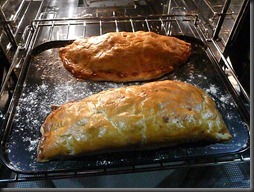 The pasties really were delicious,can’t wait for another go.One of Lisa’s projects on the right.It’s a garden ornament that she has painted using Nail Varnish,looks good.It’s not the one we had made into a Tiller Pin by the way,that still has pride of place in the window ‘cos we’re scared to use it as a Tiller Pin just yet.

That’s all again for this week,we move tomorrow just a few miles up the T&M.Since our last blog we have done no miles and no locks and since we started,on the 12th of October,we’ve done 62 Miles and 46 Locks.Take care everyone.