As you can guess from the title we are still here in beer heaven.We’ve had a good week since our last blog,having visited the pinnacle of real ale brewing at Marston’s Brewery here in Burton on Trent,and also going over to Birmingham.

We spent a week at Shobnall Fields before we did a bit of cruising up and down the T&M again in order to fill with water and empty the loo cassettes.It only takes a couple of hours or so to go up to Shobnall Basin,Wind,go through Dallow Lock,Wind again at Horninglow Basin,fill with water etc,go back through Dallow Lock and then get to where we are now,just short of Shobnall Basin.A trip like that also enables us to generate some electricity and heat some water instead of just running the engine on a fast tickover. On the left we are moored at Shobnall Fields,can you see which one is Chyandour ? On the right is the view from our lounge window on Sunday Morning,it was like a millpond.

Most of the week has been spent looking around the shops for Christmas Presents with the odd little routine job on Chyandour.Nothing drastic,just general tidying and cleaning to keep her up together.I wont be one of the”Shiny Boat Brigade”but I do like to see her being looked after,after all,she is our home and all we have now.

Wednesday was the highlight of our stay here in Burton.We were considering a train to Litchfield for the day so, while waiting for Lisa to get ready,(you know how long these things can take) I phoned the Visitor Centre at Marston’s to book a tour for next week.The delightful lady at the brewery asked if we could visit there and then as there was only a small party booked for that day,so it was away up the towpath and into Marston’s for the 11 o’clock tour.Marston’s has been brewing here in Burton since 1834 and brews my favourite tipple,along with a number of other popular brands and I was looking forward to this.The tour was very interesting,thanks to Beryl, the lady in charge being very well informed,having worked in the brewery since 1978.The best bit of the tour came at the end though,that was when we were given a couple of pints of Pedigree to “sample”,along with a variety of other brews.One thing about brewery tours is the certainty that the beer is in tip top condition and this one is no exception,the Pedigree was to die for.Thankyou Beryl. 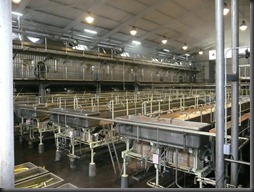 The top two pictures are of the Burton Union system of brewing,where Oak barrels are filled with ale to ferment.Marston’s are the only major brewers to use this system now and these barrels contain the latest batch of Pedigree.The bottom left picture is Lisa standing by one of the old wooden,and now redundant,brewing vessels and that’s a pair of up to date stainless steel ones to the right.

Today we went by train down to the Frankfurt Christmas Market in Birmingham,this is the third year we have visited the Christmas Market there,and having visited a number of Christmas Markets in Europe,I can say that it is as good as any we’ve ever been too.We also went to see our friends Jan And Dai who are moored on their boat Jandai just off the city centre.Birmingham is a great place to be on a narrowboat,there are miles of canals,loads of good moorings in the city centre and it’s only a few minutes walk to all the shops and markets.We had a great day sampling the wares at the market and catching up on the gossip with Jan and Dai.Merry Christmas to you both,hope to see you again soon.

Above are just a couple of pic’s I took today,not the worlds best cameraman I admit,but they at least give an idea of how the German Market looks.

The weather has been good to us for most of the last week,we’ve only had one icy morning,in fact the temperatures have been quite good for December.Long may it last as we have a few things planned for the next week or two and they all depend on the weather staying relatively mild,we have our fingers crossed.

That’s all again for this week I’m afraid.Since our last blog we have done 2 locks and 1 mile,not a lot,giving us a grand total of 68 Miles and 51 Locks to date.Take care everyone.