Well,it’s New Years Eve,the last day of one of the wettest years we can remember and I’ll bet that there are many who would echo the title of our blog this week.Lisa,Chyandour and I are still at Barton Turns waiting for the locks at Wychnor and Alrewas to open so that we can cross the 200 Metre stretch of the River Trent that lies between them.We will then be able to get on our merry way towards Birmingham,which is our next intended destination.Many of you will be experiencing the same conditions so I’ll not go into detail or whinge about it,it’s a case of “que sera sera”.The weather hasn’t really spoilt anything for us,we just have to accept that this is the U.K. and we would never have any fun if we let rain interfere.Since our last blog we have been monitoring the Environment Agency’s Measuring Station at Kings Bromley to see if there is any sign of the River Trent levels falling and,for a couple of days the levels did fall,but then,after Boxing Day,they started to rise again.Not much,mostly at no more than a Centimetre an hour,but non the less,they were rising again.The last 24 hours though,has seen a steady fall so we’re back to being optimistic about our chances again..

On Boxing day we walked off our Christmas Dinner by trekking down to Wychnor Moorings,on the far side of Wychnor Lock,in the hope we would see for ourselves how the river was.The Lock itself was “locked” and the towpath was very muddy in places so we didn’t venture any farther.It was obvious that the lock was likely to remain closed for at least another couple of days at best,even if the rain stopped.Feeling optimistic on Friday,in spite of the heavy rain on Thursday night,we set off in the same direction and walked all the way to Alrewas,a round trip of about 5 miles.To make our walk worthwhile there was the promise of some great fish and chips, at the halfway point of our walk,in the village itself.We weren’t disappointed with the fish and chips but we could see that the river still had a long way to go before it would be safe to navigate.Most of the flooding had receded,but there is still a lot of water going down the river.If you feel that Alrewas rings a bell with you it could well be that you are aware that the National Memorial Arboretum is only just across the A38 from here.This is the U.K’s centre of remembrance with a stunning Armed Forces Memorial dedicated in 2007. 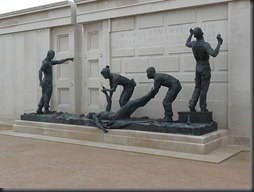 Here are a couple of pictures of the armed Forces Memorial that we took the last time we came through Alrewas in August 2008.A very,very atmospheric place that we will visit again over the next few days. 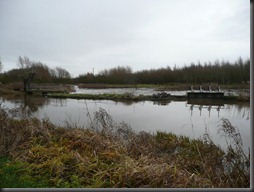 On the left the sign says it all and on the right is the sluice,fully open,letting water out of the T&M and back into the River Trent.

Alrewas lock on the left,chained and padlocked.You can make out the bollards on the lock landing over the top of the gates.This was on Friday after the level had fallen,but was rising again,and the water was up to the bollards,it must have been worse earlier in the week.On the right is the weir as the River Trent follows it’s course and the canal goes to the left.A boat has to stay well this side of the weir floats even on a good day and Friday wasn’t.

A pretty thatched cottage in Alrewas on the left and on the right is how they decorate the telephone boxes at Christmas around here.

This has been our first Christmas on board Chyandour and it has been excellent,we had a great day with family on Christmas Day,the cook did an excellent job,making a meal for nine of us.It was great to be with the grandchildren on Christmas morning,when they opened their presents,as well as opening ours of course.On Thursday we took the bus up to the nearby village of Barton under Needwood to get a few supplies.We walked back because it didn’t turn out to be all that far away,we only jumped on the bus because it came by as we stood looking at the timetable on the stop.There’s a Co-op and a Post Office and quite a frequent bus service to Burton,so we’re ok here if we can’t get away any time soon.With the pub across the road and family just a few minutes away,we could be stuck in a far worse place than here.

Well,that’s all for this week,and also for this year.We would like to wish everyone a happy,prosperous and healthy 2013 and hopefully,we will be posting from Birmingham next week.Since our last blog we have done 0 miles and 0 locks,giving us a grand total of 72 miles and 53 locks.Take care everyone and have a great New Years Eve.