Only a little bit to report today,but as always I need the practice so I will do my best.Chyandour is coming along nicely,(going to have to remind the lads at Kingfisher,who are fitting her out,how her name is spelt though).They are very kindly posting pictures of her progress on their build blog so I then pinch the photo’s and put them on here.Unfortunately we aren’t able to get to see her as often as we would like at the moment,to take our own photo’s,but that is something we are working on.While we are at Trent Lock we do keep John and Mick away from their work anyway,so it’s probably for the best we are far away.They make a nice cup of tea though. 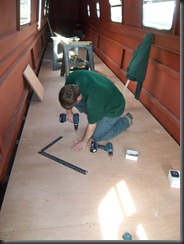 Above is John fitting her floor so that next week the sprayfoam insulation can be done and her engine can be fitted.That’s about it for today I’m afraid,but I will have a bit more for next week ‘cos we will be down to see her to take loads of photo’s.Fingers crossed that this comes out how I would like.The last post was ok when I previewed it but when I posted it the photo’s moved.

We hope everyone had a good Easter,I worked,but then,someone has to do it.We got a few pictures from Mick at Kingfisher Narrowboats before the holiday so I thought I would do another short update.Chyandour looks even better with the windows fitted and a holding coat on the cabin.The Epoxy two pack blacking has been finished and she’s looking a treat,it’s hard to imagine that three months ago she was just a piece of steel plate.John and Mick have done the ballast as well so she will be sitting lower in the water now.

Right,here are a few pictures of Chyandours build since January. 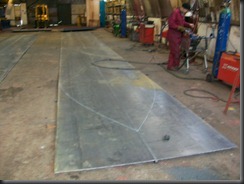 The two above are a couple of the first steps in Chyandours build at XR&D. 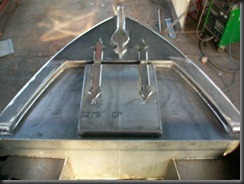 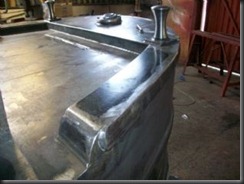 The bow and stern take shape. 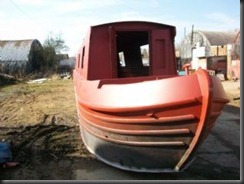 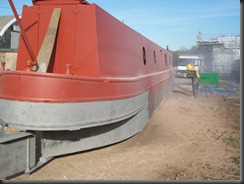 She’s outside now and in the photo’ on the left she’s being shotblasted ready for the Epoxy two pack,to protect her hull. 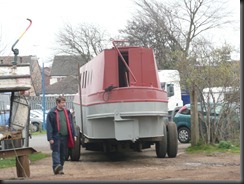 On the truck at the Sheetstores Basin and being escorted by John to the slipway ready for launching. 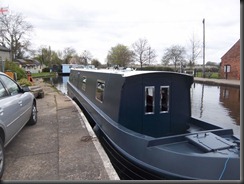 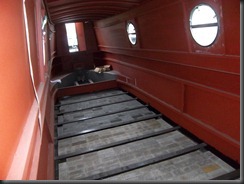 The top two are of Chyandour in her holding coat and the bottom one is her ballast.Looking good.

Hi,
This is just a little update on Chyandour to give me a bit of experience in writing a blog.Still learning you see,so i need all the practice I can get,specially putting pictures where and how I would like them.Windows Writer makes it easier ‘cos I can edit or save the draft a lot better,I do like to mess about with things till I get them right,O.C.D.says Lisa.
Anyway,back to boats.John and Mick at Kingfisher have finished the boat they have been working on.They’ve handed Cats Whiskers over to her proud owners a couple of days early so Mick has kindly let us know that they will be starting the ballasting of Chyandour in the next few days.Lisa and I have spent some time browsing tinternet for ideas and prices of various bits and pieces.How did we manage before this wonderful invention?
The fabulous weather we have all had over the last week has us wishing we had our boat now instead of October,but it will be worth the wait,I know.Keep hoping that all boaters out there are going to have enough water this year as well.
Right,let’s have a go at some more photo’s.These are just a few of the hundreds we’ve taken,but I really do need the practice at inserting them in the blog. 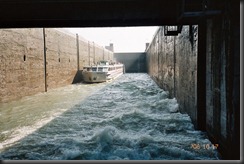 These two were taken on the Rhine in 2006,on the left is the Abel Tasman preparing to leave the lock after us and on the right is Britannia,the boat we were on,a slightly larger narrowboat that cruised up and down the Rhine. 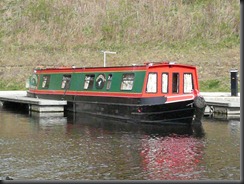 The couple above are of Snowmane from Chas Hardern in April 2008,another family holiday,this time on the Llangollen.On the left,going over the Pontcysyllte Aquaduct and moored in the basin at Llangollen on the right. 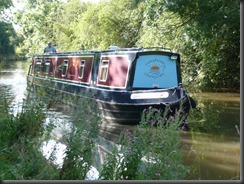 A couple we took in August 2008 on Canaltimes Coneleys Thunderdome,I think that was the name,where do they get them from I wonder.Above left is Hawkesbury Junction and on the right we are on the Ashby.This was a holiday we had with family,two weeks on the Ashby,the Coventry and the Trent & Mersey. 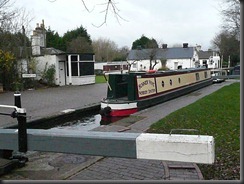 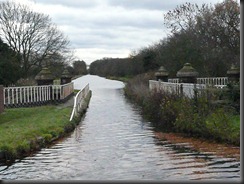 The above four were taken in November 2008 on Summer Wine from Norbury.Top left is at the Black Country Museum,thats us on the left,a great place to visit and moor.Top right is Autherley Stop Lock,bottom left is Stretton Aquaduct and bottom right is the Double Culvert bridge 40 on the Shroppie,fascinating bridge,the telegraph pole no longer has wires on it. 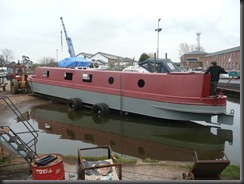 The above photo’s,and the last ones for now,were taken by Lisa as Chyandour was put into the water at the Sheetstores Basin on the Erewash.Thats Mick on the stern checking everything is ok.
Posted by Fred and Lisa. at 17:23 No comments: