This week we are moored at Shobnall Fields to the north of Burton On Trent,a nice,quiet,open mooring,only fifteen minutes from Burton itself,so it’s just a walk to the shops.We had a bit of sad news the day before we arrived here,the friend I went to see only a week ago,passed away quite suddenly.I guess it was fortunate I saw him when I did,we were friends for forty years,though I have only seen him occasionally over the last few years.

We stayed an extra day in Willington because it was raining cats and dogs last Tuesday morning and there was no sense in getting wet if you’re not going anywhere special.On Wednesday we slowly made our way to Stretton,on the outskirts of Burton,where we moored for a couple of nights.The A38 runs alongside the canal for some of the way through Burton and the traffic is very noisy so we wanted to be sure we got some quiet moorings.Stretton was the last obvious place to stop while we checked out what was ahead.After a chat to a local boater,who gave us the lowdown on mooring around here,we cast off on Friday morning and moved the last couple of miles or so to where we are now. 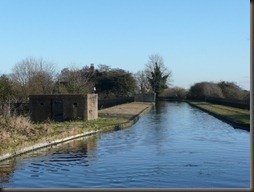 The picture above on the left is the Aqueduct over the River Dove between Willington and Burton,close to Stretton,with it’s World War Two Pillbox.Thousands of these Pillboxes were built close to canals in the belief that they would act as a barrier in the event of an invasion by the Germans.The right hand picture is of the River Dove itself,we have crossed this river here many times and the river has been little more than a trickle,now,as you can see,it’s in flood.The flood was receding as I took this pic’,but only a few days before it had broken it’s banks and flooded the nearby A38 causing chaos. 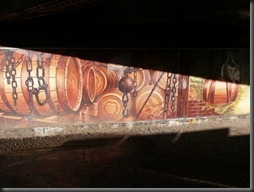 Above left is the thin covering of ice that we woke up to on Thursday morning the whole of the canal was covered,it had thawed a bit before I plucked up the courage to venture out and take a pic’.Lisa flatly refused to go out, “just to take a picture”.On the right is some of the artwork on the bridge over Dallow Lane Lock,it celebrates Burtons connection with brewing.

Burton has been a centre for brewing beer ever since the monks at Burton Abbey first started brewing ale here around eight hundred years ago.At one time there were thirty one breweries producing up to three million barrels of ale a year,a truly liquid heaven.We are going to spend the best part of the next two weeks here so that Lisa can get the rest of her Christmas shopping and I can sample some of the current production from Marston’s brewery.All the facilities that we need are close at hand and one of the stoppages ahead of us has been extended so we can’t go very far anyway.The lock about four miles up the T&M from here will not now open till the 21st of December,just in time for us to get to Barton for Christmas.

The left picture is what I believe is a fountain in the grounds of Molson Coors brewery.I guess the water is turned off for the winter.On the right are some of the Brewery Vessels in the Molson Coors brewery.I used to work for a transport company as a driver,and we delivered vessels like these all over the country from where they were manufactured here in Burton.A great job,police escort all the way.

At the weekend we had visits from family and friends and Saturday saw us taking some of them on a short trip up to the next winding hole,back to the one behind us and then back to here to our mooring.It was a nice sunny but cold day and it was surprising who was the most competent at steering the boat,the ladies won this time.At the end of the afternoon we walked back to Horninglow Basin and into the nearby Navigation for a refreshing pint of good old Marston’s Pedigree.In the meantime Lisa has put some more decorations on the boat,in addition to her homemade Christmas Tree,and I’ve put some solar lights on the front as we get ready for our first Christmas afloat.Chyandour is starting to look very seasonal. 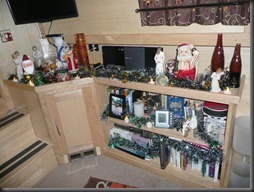 Lisa’s efforts so far,on the left and the solar lights I put up in the Cratch on the right (hope you can see them).

O.K. that’s all for this week,we should be out exploring a bit more next week.Since the last blog we have done 6 Miles and 3 Locks (the same one three times).our running total has now reached 67 Miles and 49 Locks.