This week our blog,once again,comes to you all the way from the Shropshire Union Canal,this time,from just below the Adderley Locks near the village of,guess what?, Adderley,in Cheshire.A tiny village about a third of a mile from the canal with no pubs or shops that I’m aware of.We’re still here because,after all the weeks of lovely weather,the weather forecast on last nights Countryfile said it would chuck it down with rain.Our intention was to get to Audlem but,hay ho,we’ll get there another day and make the most of where we are for a bit longer.

Yesterday morning at our mooring here at Adderley,looked like a good day was on the cards.Yesterday evening.What do they say about “Red sky at Night”?

Since our last blog we have covered a lot of old ground,or water,to be precise.We blogged from a number of places on the Shroppie last year and,as we’ve been taking things very slowly,there hasn’t really seemed to have been a lot to blog about these last couple of weeks or so.Our last blog came to you from Oxley on the S&W and we left there three weeks ago,in the company of Mick and Marianne on NB Doormouse,and made our way back up the Shroppie to Brewood where we parted company the next day.They were heading home and we were on our way to meet friends at Norbury,as we waited at Wheaton Aston Lock for a boat coming up,we had another surprise.The boat in the lock was that of some more friends that we haven’t seen for well over a year,Wixie and Kate,who’s boat name I can never remember,it’s something Welsh,I think.After swapping stories with them we parted company and continued on our respective journeys only to bump,not literally,into another boat and crew at the next bridge.It was someone else we haven’t seen for a while,but who’s names and boat name we just can’t remember for sure (It’s got to be an age thing).They came to the rescue of Lisa’s fairy ornament that got blown of the bows into the T&M at Shobnall Fields nearly two years ago.Anyway,after a brief chat,we set off once again,arriving at Norbury on the Thursday.

A dinky little narrowboat moored above Countrywide Cruisers near Brewood,not quite the smallest we’ve seen but getting close to it.At last,I managed to get one of the little monsters to stand still for long enough for me to get the camera,find it in the viewfinder and then snap.It’s in there somewhere,I hope you can see it.

Our first night in Norbury was with some more friends and we all piled into the Junction Inn for a meal & only the odd glass or two to wash the food down.Norbury has a lot of good memories for us as we used to hire from there quite frequently and as a result we got to know some of the people who moor and work there.There’s Ange and Mark on NB Merry Pippin and Peter and Sandra on NB Miss Molly who we ate with in the pub,and then there are others who moor nearby or work on the wharf and in the tearooms.Friday was the day that we were waiting for though,The Cats Whiskers was coming to Norbury to go into the drydock and have a new prop fitted,having done some minor damage on her travels.We hadn’t seen Pat and Rodger,her crew,since they paid us a visit while we were moored in Birmingham for last years Christmas Market,and it was good to see them again.The Cats Whiskers is the sister to Chyandour,having been built by Kingfisher Narrowboats at Trent Lock in 2012,just before they started our boat. 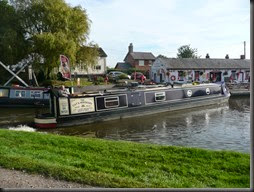 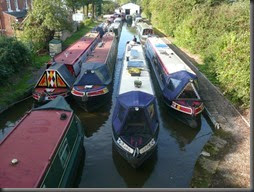 David manoeuvring The Cats Whiskers in the basin and threading her way backwards down the old Newport Canal to the drydock at the end,which was the former Lock 1. 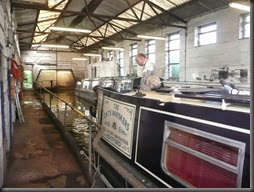 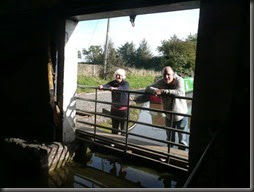 The Cats Whiskers gently entering the dry dock at Norbury and Pat and Roger holding the Stop Planks down while the lock was drained. 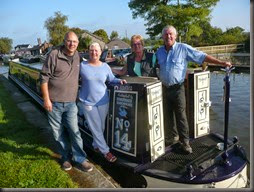 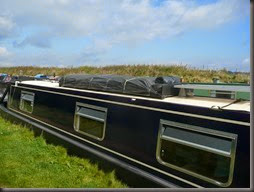 Me and Lisa with Roger and Pat just before they set off on their travels South and us to prepare to head North.Another job done,Chyandour loaded with coal and nicely sheeted down.Reminds me of when I first started driving trucks,no Tautliners then.

Our time at Norbury was well spent,we got all the little jobs done that build up over the year and that keep getting put off till there’s a more suitable time,a time that somehow hardly ever seems to arrive when you want.Over the following few days we had a few meals and even more drinks in The Junction and on the last day we were taken by Peter,Sandra and Carolyn to the Stone Food and Drink Festival where we had a great time sampling some of the food and drink there.We rounded our whole stay off with a last meal in The Junction on Friday night. 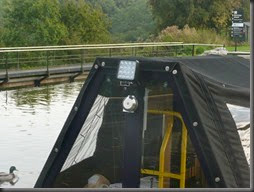 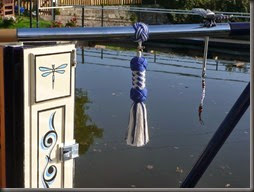 A couple of the little jobs I’ve been meaning to do on Chyandour.I’ve been looking at these LED Tunnel Lamps for a while ‘cos the old lamp was the only light on our boat that wasn’t LED.This was one of ebay’s finest & I think it looks good,just looking for a long dark tunnel now.Our other new addition,a Tiller Tassel,hand made by Dave Edwards off NB Louisa,see the connection?

We finally tore ourselves away from Norbury a week ago Saturday with the intention of taking our time heading North and stopping at a few places that we hadn’t stopped at on our previous travels up and down the Shroppie.There was The Anchor at High Offley,an unspoilt canalside pub,built in the 1830s and where the beer can still be served from a jug from the cellar on request.Then there was The Wharf Tavern,a more up to date hostelry at Goldstone,both of which came highly recommended for their own unique characteristics.Needless to say we enjoyed a drink in them both and the WiFi in the Wharf was good,on the mooring nearby there was nothing at all. 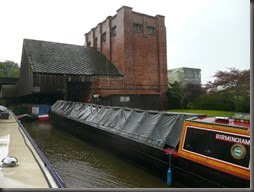 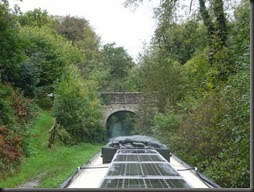 The old “Factory in the Fields” at Knighton,built by Cadbury’s in 1911 to make Chocolate Crumb for their factory at Bournville which is also alongside a canal,the W&B.Approaching one of the few places on our canals that Lisa isn’t fond of,Woodseaves Cutting.Thomas Telford was the engineer and it was dug in 1832.Overall it’s just under 2 miles long,up to about 65 feet deep and it’s sides can be steep and vertical which occasionally result in landslips. In the deepest part of the cutting the waterway narrows to about half its normal width and it was all dug by hand,no JCB’s then. 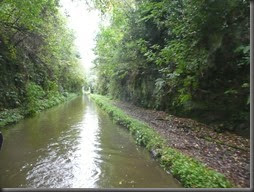 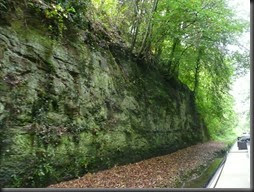 Inside the cutting,surprisingly,it’s possible to get a phone signal in there. 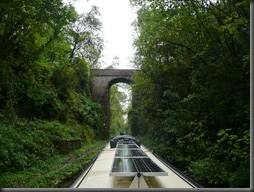 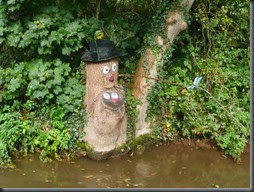 One of the high bridges that span the cutting give an idea of it’s depth,nearly 40 feet at this point to the top of the bridge.A happy face to great you as you emerge from the North end of the cutting.

Shortly after we left the cutting we came across the 5 Tyreley Locks,which are close together and have one particular characteristic,you can’t moor in the bottom pound to work locks 4 or 5,it’s too shallow at the edges and you can’t get off the boat.Instead you wait in either lock till the other is set in your favour,many crews have been caught out by this,two while we were there.Anyway,this time,there was a problem with number 5,it emptied as fast as it filled because of some obstruction on the bottom gates.It was intermittent,which never helps,we could close the gates and get a boat through ok then the next boat would struggle.CRT and ourselves groped around to try and remove the obstruction but,having helped the last of the boats through,Lisa and I left Steve and Dave from CRT still busy.I guess they cleared whatever it was ‘cos boats were moving in both directions later in the day.

From there,our next stop was Market Drayton,where we wanted to stock up on supplies as well as visit the Wednesday market that we had always seemed to miss when we had visited before.We weren’t disappointed,managing to get a nice fresh rabbit for the pot,the first one for over a year.We also treated ourselves to Fish and Chips,which have become a bit of a delicacy on the boat.Hot cooking oil and boats don’t mix so we don’t make our own you see.The Tudor Fish & Chip shop on Stafford Street in Market Drayton serves good food with friendly service and we thoroughly enjoyed our takeaway.

After a couple of days in Market Drayton we decided to head up to Audlem for the weekend but that plan went out of the window,as is often the case,and we decided to stay here.This weekend we celebrated our second anniversary of living on Chyandour and my 66th birthday with our home brewed Cider and very good it was too.

That’s all again for this blog folks.Since our last one we have done 12 Locks and cruised 30 Miles,not a lot for three weeks.That gives us a Grand Total of 990 Locks and 1,624 Miles since we set off two years ago.Take care everyone.