This week we are moored on the Staffordshire & Worcester Canal at Oxley,between Autherley Junction,where the Shropshire Union starts on it’s way through Cheshire to Chester and Ellesmere Port,and Aldersley Junction,where the Birmingham Mainline ends,after it descends the 21 locks from Wolverhampton.It’s a good safe mooring here opposite Oxley Marine and there’s the added bonus of a friendly club house if you walk over Oxley Moor bridge.We’ve been here for a couple of days while we’ve waited for some friends to make their way down the 21,assisted by us of course.We walked up the flight,trusted Windlasses and Anti-vandal keys in hand,to meet them and help them through the locks.The four of us brought NB Doormouse down the flight in one hour fifty minutes.

Having left our mooring South of Brewood a week last Wednesday,we moved a couple of miles up the Shroppie to a mooring spot just a bit to the North of Brewood.Brewood is one of those places that we enjoy so much,there isn’t a lot there,just a Co-op/Post Office,a Bakers and a Greengrocers,a couple of pubs,various other interesting shops and a superb Butchers who’s meat is second to none.The Butcher will gladly deliver to boats on the canal if you’re only passing through and don’t have the time to walk into the village.After another day or two there we moved on further Northwards to Wheaton Aston for the weekend.Having winded at Wheaton Aston we left last Monday and made our way back down the Shroppie and stopped again for a couple of days at both of the moorings above and below Brewood.The reason there was no blog last week was because,as you can now no doubt work out,I really didn’t have a great deal to tell you,we just haven’t done much.In fact,we are still going to be taking things easy for another few weeks as we just gently make our way North for the end of November.We’ve got about ten weeks or so to do about 45 miles and 30 locks,that is,if we don’t decide to go off somewhere for a few days. 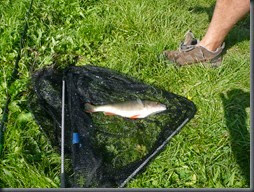 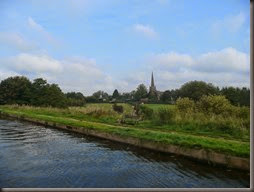 Just a little something I caught while we were moored above Brewood.The village of Brewood,viewed from the canal,with the Parish Church in the background. 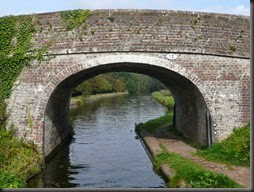 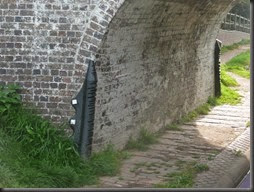 Deans Hall Bridge to the South of Brewood,notice how the rope from the horse drawn boats has worn grooves into the cast iron plates on the bridge abutments. 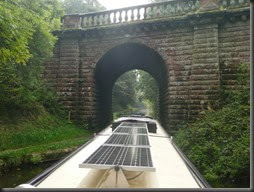 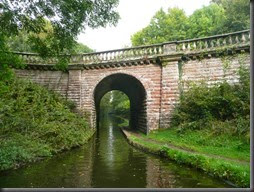 The ornate balustraded Avenue Bridge on the Shroppie looks a bit narrow as we approach.It was designed by Thomas Telford but what it was built for I’ve been unable to discover. 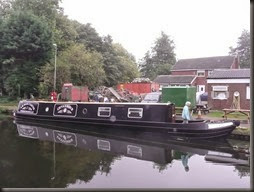 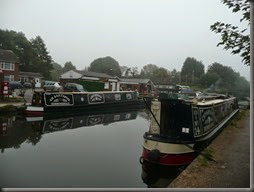 A rare sight here at Oxley,two boats called Chyandour and as far as we know they are the only two with that name.The other is usually moored a few miles down the Staffs & Worcs from here at Dimmingsdale Wharf and we have met the crew on a few occasions now.

While we’ve been here at Oxley we got the bus on Saturday and went first into Wolverhampton,which is only a couple of miles away,and then from there to Tipton.The friends we were waiting to meet on the 21 were at the Canal Festival in Tipton and we thought we would just turn up and surprise them.We haven’t seen them since the end of November last year when they came to see us while we were moored at Merry Hill.Marianne and Mick are Canal traders on the Lollypop boat,and go to many of the festivals selling sweets while Marianne also reads Tarot Cards.Sadly,Saturday wasn’t a great day weather wise,it drizzled for most of the time we were at the festival,but there was still quite a good crowd of people brave enough to endure the typical UK weather and there was a good turnout of old working boats and entertainment for those that visited. 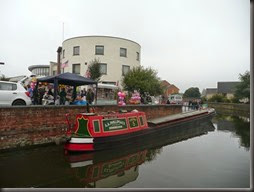 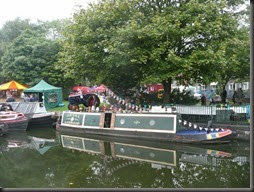 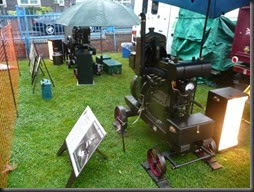 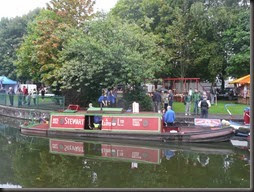 Just a few of the photo’s I took at the Tipton Canal Festival.As you can see there was a good turn out of old working boats.

Well that’s the lot again for this blog.Since our last post we have done 3 Locks,the one at Wheaton Aston twice,and 13 Miles,that’s up and down the same bit of the Shroppie.That gives us a Grand Total of 978 Locks and 1,594 Miles since we set off in October 2012.It’ll soon be two years.Take care everyone.

There’s not much been happening over the last couple of weeks but I’ll do me best.At the moment we’re moored on the Shropshire Union Canal on the SUCS moorings to the South of the village of Brewood,pronounced Brood.We left Tixall Wide a week ago last Tuesday and made our way towards Stone on the T&M in the company of Tadpole 2,stopping overnight at Weston where we enjoyed a few beers in the Saracens Head and the Woolpack.Then from Weston we moved 6 miles and 2 locks up the T&M to Stone,a place we have passed through on a few occasions but never stopped.This time we stayed for 4 nights and got to know the place quite well,especially,though not exclusively,the Swan.We did enjoy a couple in the Star,which is right next to the canal,at,guess what,Star Lock.It’s a good pub for Gongoozeling,that’s a canal word for non boaters who watch boats.Star Lock is often the first lock that some hire boaters encounter and it can provide a bit of entertainment on a sunny day.Don’t get me wrong,when we first hired we were just the same and even now a momentary lapse of concentration can result in some funny manoeuvring,believe me,we can all make mistakes. 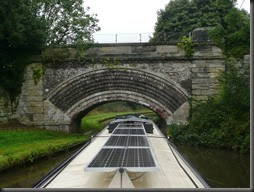 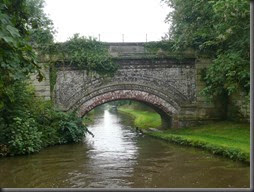 The two sides of Salt Bridge No.82 on the T&M near,of all places,Salt in Staffordshire.The brickwork is far more intricate on the South side.

Last Sunday we said our farewells to Val and Pete,the crew of Tadpole 2,and to Stone and made our way back South on the T&M heading towards Great Haywood and the Staffs & Worcs.Our plans were for us to head back down the S&W and then turn right up the Shropshire Union taking the rest of this month and part of October to get up to the Middlewich Branch.On our way here to Brewood we stopped off at a few places,Stafford Boat Club again,was one.Here we could get the bus into Stafford for Lisa’s eye test,which I’m glad to say went well.We then took four days to do the fifteen miles to Autherley Junction and the Shroppie.Spending a night in Penkridge again and a night at Hatherton Junction,where the old Hatherton Canal joined the S&W,before mooring opposite Oxley Marine,near Autherley junction on Friday. 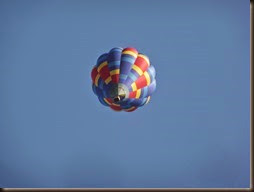 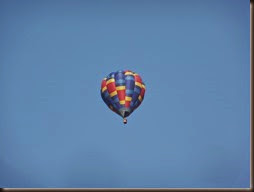 This Balloon past over our mooring bright and early last Tuesday morning while we were at Stafford Boat Club. 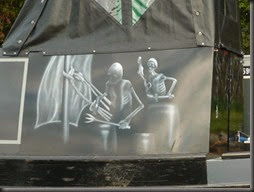 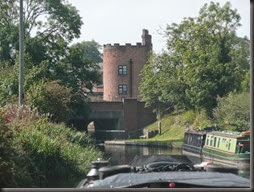 The paintwork on “The Black Pearl” moored at Penkridge.Approaching Gailey Lock on the S&W with its round Lock Keepers cottage.The cottage was built around the early 1770’s and gave an all round view along the canal for the Lockie,who lived with his family on the top two floors. 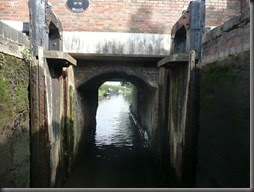 Yes,we got through there with Chyandour,and without touching the sides.The Roundhouse,the former Lock Keepers cottage,now a souvenir shop. 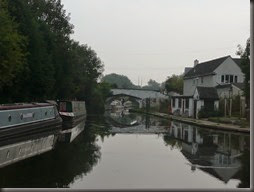 The old Hatherton Canal,this bit opened in 1841 and went for three and a half miles and through eight locks to Churchbridge where it connected to a Tramway from the Great Wyrley Coal Mines.It was a bit misty when we left but on a clear day it’s possible to see the first lock through the bridge arch,Calf Heath Bottom Lock,which is still in water.In 1863 the canal at Churchbridge was connected to the Cannock extension Canal but sadly in 1949 it was closed and most of it was destroyed by opencast mining after 1955.There are plans to restore it and Lisa,Chyandour and I have now been to both ends of the proposed restoration.The second pic’ is us going under Hatherton Junction Bridge on the S&W mainline.

Our first stop on the Shroppie was at Wolverhampton Boat Club.We’ve passed there loads of times and often wondered what it was like ‘cos you can see the clubhouse alongside the canal.Well now we know.Lisa and I are members of the Residential Boat Owners Association and they had a Council Meeting at the club on Saturday afternoon which was open to members.We wanted to go out of curiosity to see what the people who represented us were like and I must say we were made very welcome by every one of the Council members,they were genuinely pleased to see us.the meeting lasted about four hours and it’s nice to know that your representatives are as enthusiastic about our waterways as we are.We stayed moored for the night at the club because as we were leaving we were invited to an evenings Pig Racing in the bar which looked interesting to say the least.

A couple of Pic’s of the Pig Racing.Lisa won on the last race and got her money back,me,I lost.

We moved a mile up the Shroppie on Sunday morning to where we are now and,having walked into Brewood today to send a parcel,we will probably stay tomorrow too,especially if the weather is good.Our solar panels give us all the electric’ we need when it’s as sunny as the last two days have been.

Well that’s all again for this week folks.Since our last blog we have done 21 Locks and 43 Miles,that gives us a Grand Total of 975 Locks and 1,581 Miles since October 2012.Take care everyone.