Well,we are almost there,only a few more hours and we will be spending our first Christmas on a narrowboat,and our own narrowboat at that.We have covered the last stretch to Barton Turns,where we had always planned to be for Christmas,and for now,this looks like being as far as we can go anyway.The reason for this is that just two miles ahead of us the canal is closed because of flooding.There’s a short stretch of the River Trent,near the village of Alrewas,that we have to negotiate,and until the water levels drop we can’t get onto it and onward to our next port of call.We had hoped to get to Birmingham for the New Year,but sadly,that looks to be out of the question now.

Most of the last week has been spent dodging the rain and what a week some of you have had,It’s beginning to look as though living on a boat could be the answer for many in the future.I seem to recall that we were facing water shortages at this time last year,now look at it,and last week I was hoping for mild weather,I didn’t want this much rain though. We have managed to get out and about a bit and there’s flooding in a number of places in the area,with some roads closed,but I am glad that there haven’t been any sign of peoples property being flooded.That must be horrendous at any time but even more so just now when most of us like to be in our own homes to enjoy the festivities.Lisa was caught in the flooding in January 2003 in Perth and she will tell you,”It’s no fun”.

We went into Shobnall Marina on Friday to fill with diesel and water and get some coal and a few other bits.This is a great marina run by Cliff and Janette Orton,with a chandlery and cafe,both with very friendly and helpful service and,above all,reasonable prices,so,if you’re passing,call in,it’s worth it,if only for the bacon sandwiches.After doing our bits in the marina we set of to get a bit closer to Barton Turns,and after two miles and one lock we came across a pub next to bridge 34 at Branston,called,The Bridge Inn,bet that surprised you.Anyway,this pub had been recommended to us and,just as we had been told,the food was excellent.It’s an Italian restaurant really and the food was delicious,especially when washed down with Pedigree.We stayed moored at bridge 34 until today because the weather wasn’t all that good and why move if you don’t have to.We had a couple of walks around the Branston Water Park and into Branston itself,there are a couple of handy shops in the village.The idea was to do the last leg of our journey this morning,unfortunately,when we woke it was persisting down,as bad as any of the recent days,but we needed to get here to Barton,so on went the waterproofs and off we set.It was only another couple of miles and one lock so it wasn’t too bad,we’ve cruised in heavier rain and it can be enjoyable in it’s own way. 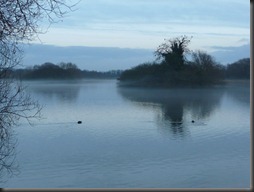 Above left is the entrance to Shobnall Marina.This used to be the entrance to the Bond End Canal which finally connected the T&M to the River Trent in 1794 after a number of years of argument between the respective owners.The picture on the right is of the Branston Water Park,a wildlife habitat,which was formed from a disused gravel pit. 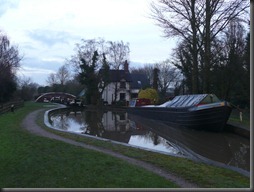 On the left is a traditional working boat moored just beyond Tattenhill Lock on the T&M and on the right,a view over the flooded fields alongside the canal at Branston.Incidentally,Branston was originally the home of Branston Pickle.

Well that’s all for this week,we are off to the Barton Turns Inn shortly for a well earned pint so Lisa and I would like to wish you all a very Happy Christmas.Since our last blog we have done 4 miles and 2 locks,making a total,so far,of 72 miles and 53 locks.