This week we are on the Titford Canal near Oldbury in the West Midlands and we are moored opposite the former Wolverhampton & Dudley Breweries,Langley Maltings.These buildings were built around 1880 and the grain used for the making of Malt,which is used in the brewing process,was initially delivered by narrowboat,production ended in 2006.The Titford Canal was opened in 1837 and is the highest part of the Birmingham Canal Navigations. 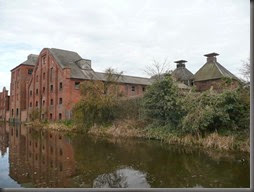 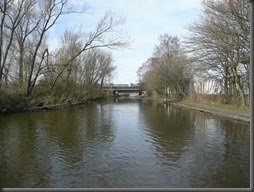 Langley Maltings,opposite our mooring on the Titford Canal.The End of the the navigation at Titford Pools and the Portway Branch with the M5 motorway bridge in the distance.The Portway and the nearby Causeway Green Branches were abandoned by 1960 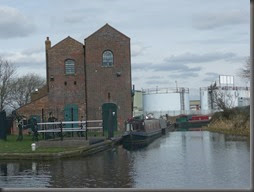 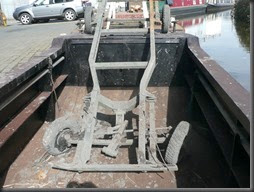 Titford Pump House,which was built to pump water from the bottom of the Oldbury Locks back to the top,and the Junction of the Titford and Tat Bank Branch Canals.The Tat Bank Canal is closed and is used for residential moorings.Something that was pulled out of the canal near Smethwick and no one is sure what it is or was.It’s definitely military,probably army but the only markings on the chassis are the tyre pressure stencils and the body is obviously missing.Anyone got any ideas?

last week,while we were moored at Windmill End,one of the things I wanted to do was  visit a local hostelry called “ Ma Pardoe’s” or The Old Swan.They brew their own ales at The Old Swan,with names like,Old Swan Original,Entire and Bumble Hole,and I can vouch for every one of them.A plate of Liver & Onions washed down with a few pints of Bumble Hole led to a memorable night on Tuesday.On Wednesday we left Windmill End to nip down to the end of the Dudley No.2 Canal at Hawne Basin where Coombeswood Canal Trust provide some lovely services as well as very cheap diesel.We spent the night there and made use of their washing machine and dryer,again very reasonably priced,and they also have a bath.Yes,a proper bath,with plenty of hot water,something Lisa only gets to enjoy nowadays when we stay in a hotel.

On Thursday morning we filled up with diesel and made our way back to Windmill End for a few more days of taking things easy. Then,on Friday morning,out came the Bus Passes,and we nipped over to Dudley to get a few bits and bobs.In the afternoon we got on the first bus that came along in the opposite direction and went to Stourbridge where we had a pleasant browse around the town that is famous for its glass making.

Saturday was just a day to relax in the warm sunshine that we are enjoying at the moment and also to take a look at the Visitor Centre at Windmill End.Bumble Hole & Warrens Hall Local Nature Reserve Visitor Centre,to give it it’s correct title,is run by volunteers who operate a small cafe and sell bits and pieces to raise funds.Inside the visitor centre there are maps and models showing what was here not so many years ago,as well as the details of Hingley & Sons the chain-makers of nearby Netherton,who made the anchor for the Titanic.I find this whole area fascinating,what was once a mass of industry is now green and pleasant land,to steal someone else’s phrase.There were Coal Mines,Blast furnaces ,Iron Works and Brick Kilns here,all belching out the black smoke and grime that led to the area being called “The Black Country”. 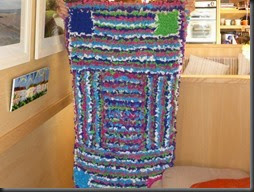 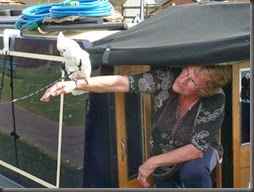 One of the things we have a go at on the winter evenings is making Rag Rugs.This one was made by Lisa,it’s her fifth,all different sizes and this one is the largest.Mine’s a bit bigger and not quite finished yet.Lisa with Peppa the parrot.Her owner takes her out for a couple of hours every day,as you can see she’s on a lead but doesn’t fly very far,just a few feet.

We left Windmill End,for the final time on Sunday morning after topping up Chyandour’s water tank,and cruised the 3 miles and a bit,back through the Netherton Tunnel,to Albion Junction on the BCN Main Line.It was a gloriously sunny day and we recorded the highest temperature so far this year,just a tad over 23 Degrees.We left Albion Junction this morning,turned South onto  the Gower Branch of the BCN and up through the Brades Locks to Brades Hall Junction with the Old Main Line.From there it was along the Old Main Line to Oldbury Junction where we turned sharp right onto the Titford Canal and then up the 6 Oldbury Locks to where we are now.A very pleasant 3 hour cruise. 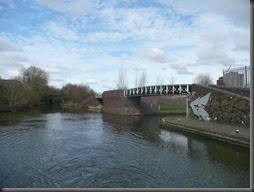 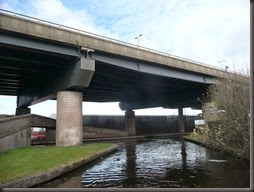 Brades Hall Junction on the Old Main Line after we came up Brades Locks.Oldbury Junction,after we had turned,that’s the M5 Motorway crossing the junction. 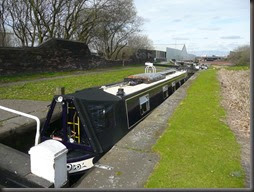 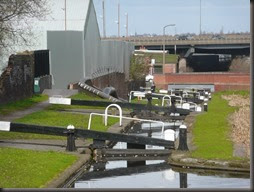 Chyandour rising up one of the Oldbury Locks and looking down part of the flight with another M5 Motorway bridge in the distance.We’re pretty much surrounded by the M5 but you can’t hear it where we are moored.

Well,that’s it again for this week.Since our last blog we have travelled 10 Miles and gone through 9 Locks.That gives us a Grand Total of 607 Locks and 1068 Miles since we set off in October 21012.Take care everyone.