Well,that’s it,we’ve finally sailed away from Birmingham after almost 20 weeks and in that time we’ve done over 200 miles,gone through 135 locks,drunk gallons of Real Ale and various other alcoholic beverages,and all in all had a fabulous time.Our thanks go to Andy and Di’ off the good ship Fenakapan who have been our companions since we got back together at the end of November.Between them they showed us places we would unlikely have found ourselves and shared their knowledge of the BCN and Birmingham with us.Andy probably knows the location of every Real Ale pub in the whole of Birmingham and he showed us some good ones.We’ve both gone our separate ways now but,if all goes well,we will meet up again later in the year.Lisa and I are now heading for pastures new and hopefully some new friends as well as some old ones.

Our blog this week comes from the Birmingham & Fazeley Canal in North Warwickshire,just on the outskirts of the village of Curdworth.You can just about make out the distant hum of the M6 Toll and M42 Motorways from here,and there’s the occasional roar of engines from Birmingham Airport,if the wind is blowing the right way,but it’s nice here in the open countryside.We left Birmingham yesterday morning,going down the 13 locks on the Farmers Bridge flight in an hour,thanks to assistance of Andy and Di’ and another gentleman who no longer has a boat because of the poor health of his wife.He likes to help boaters down through the locks having moved to Birmingham after “discovering it”,so to speak, when he had his own boat. Yesterday was a lovely day for cruising the canals so we made the most of that good start and did a total of 27 Locks and 9 Miles before calling it a day.I think that may be some sort of record for us.

Most of our time since last weeks blog has just been spent pottering around Birmingham and getting things together for our departure.I had a good day in the new library on Thursday looking through some of the old maps and books that show the routes of the canals when they were originally built.It surprised me to see how they were constantly being changed to meet the requirements of ever changing industries,canals,branches and arms were filled in or new ones dug as the need arose.On Saturday night we had our farewell meal with Andy and Di’,nothing special,just one of Wetherspoons grills washed down with some of their real Ales.Wetherspoons are having a Real Ale festival at the moment and there are about 50 ales from around the world,from Spain,the USA and Sweden,to name a few,as well as UK ones.We then went into the The Post Office Vaults on New Street and what a delight that is,it’s a tiny bar but they too do ales from around the world and we had a great time.Lisa particularly liked a Belgian one made from Coconut milk. 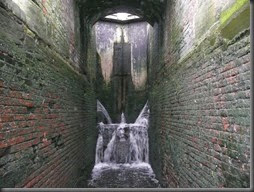 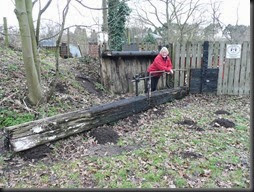 I haven’t taken any pictures since last week so I thought I’d give you a selection of ones I’d taken on our hire boat days.Here’s a couple from off the Staffordshire & Worcester.We hired just after the big freeze of 2010 and shortly after these were taken we had to turn back because of ice.The left one is of the Botterham Staircase Locks.On the right Lisa is doing her usual. 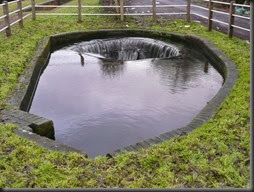 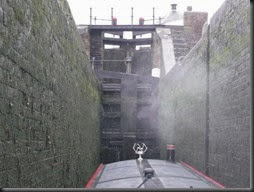 One of the ornate Bye Washes on the S&W,each lock seemed to have a different one.A smoky approach into the Bratch  Locks.They are not a Staircase because there is a Pound between the lock gates but it’s only a few feet long. 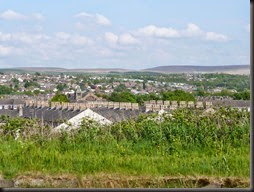 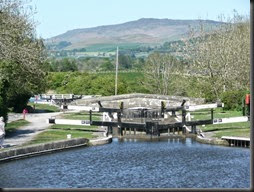 These two were taken in May 2011 on the Leeds & Liverpool Canal.The view from the Burnley Embankment on the left.The most striking thing is the Chimney Pots,they’re all the same colour,hundreds of them it seems.A view down some of the broad locks on the L&L,they can be hard work if there’s just the one boat,it’s better if you can share.

Well that’s all again for this week.Since our last blog we have done 27 Locks and 9 Miles,all yesterday.That gives us a Grand Total of 643 Locks and 1088 Miles since we set off in October 2012.Take care everyone.