This week we are moored in Penkridge on the Staffordshire & Worcester canal.It’s been a couple of years since we last moored here and it’s nice to be back again,we like it here.The last time we were here was while we were on a hire boat from Norbury Wharf in January 2011,just after the big freeze and,having failed to get to Stourton Junction because of ice,we turned and came here.We stayed for a weekend and our family came out to see us and we enjoyed Sunday lunch in The Boat,a pub by the side of the canal.Penkridge isn’t a big place but it has a large market and a few pubs and it’s not far to walk into town from the canal. 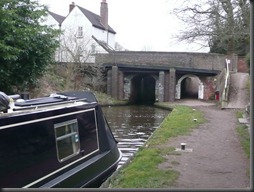 The front of Chyandour while I wait on the Lock Landing for Lisa to open the lock gates just under the bridge ahead as we go into Penkridge,The Boat pub is just off picture to the right.There’s Lisa,sampling the wine as she cooks dinner.Not sure if there was wine in the recipe or whether Lisa was just starting early.

We’ve had a pleasant week since our last blog,having moved up the Trent & Mersey from Alrewas to Great Haywood Junction,where the T&M meets the S&W.On the way we stopped off for a few supplies at Rugeley.The murder here of Christina Collins,in 1839,was the inspiration for an Inspector Morse TV mystery called the Wench is Dead.From Rugeley we cruised up to Great Haywood,where we spent three days doing our usual activities of walking and looking at interesting features both on and off the canal.There are quite a few interesting things in the area around Great Haywood.There’s Shugborough Hall,which is closed for the winter until late March,but we still managed a walk round the grounds.We’ll save the hall for the next time we pass that way.There’s the stables and gatehouse that are all that’s left of Tixall Hall,sadly,these can only be seen from a distance,private property,I believe,the hall itself was demolished in 1927.Tixall Wide,a part of the S&W canal,is said to have been created by James Brindley in 1771 for the then owner of Tixall Hall,Thomas Clifford,who asked that the canal be made to look like a lake so as not to spoil his view.The things that money can buy. 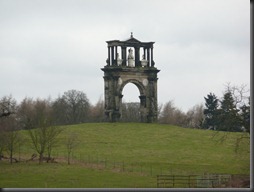 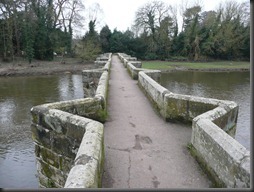 An assortment of Photo’s from the grounds of Shugborough Hall.Top left is the hall itself,top right is the Triumphal Arch,bottom left is the Tower of the Winds and bottom right is Essex Bridge,a Packhorse Bridge built in 1550 to enable Queen Elizabeth 1st to go hunting when she visited the estate.

On Saturday night,while moored next to the towpath,we heard what we thought was running water,something we shouldn’t have been hearing,it can mean there’s a problem.At night you can get a few odd noises but usually they are nothing to worry about,just a small animal,or ducks or something,but this sounded a bit more serious.On looking out of the front I couldn’t see anything and,as usual,the noise stopped.I got back inside and the water started to run again,strange,I decided to creep up on it,so torch in hand,out I went and there it was,a mole,so close to the canal that the soil it was pushing out from it’s hole was falling straight into the canal and sounding just like running water.The noise stopped after a short while,but at about four o’clock in the morning it started again,this time outside the bedroom porthole,I was glad at this time that I knew what it was. 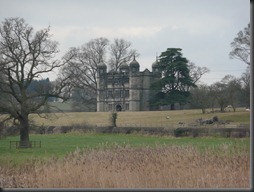 A couple of views from the canal after Great Haywood.On the left is the gate house to Tixall Hall,its now used for holiday flats I believe.On the right is Tixall Farm,with a dovecote above the centre arch.There’s an unusual two storey grey building on the extreme left of the red brick farmhouse,it’s called Bottle Lodge and was once used by a shepherd.

We left Great Haywood on Sunday and made our way up the S&W towards Penkridge but decided to stop a few miles out,in a remote location,just above Deptmore Lock,near Acton Trussell.It’s so quiet and peaceful in places like that and we had a very enjoyable and relaxing afternoon and evening.While there I got a message from Lee Shepherd of Hapton Valley Boats offering a 5% discount off their holidays for anyone reading our blog.Hapton Valley Boats are based at Reedley Marina on the Leeds & Liverpool canal and have excellent boats at very reasonable prices,probably the cheapest we experienced when we were hiring,and,with no hidden extras like fuel surcharges.The L&L is an excellent canal with wonderful views as it crosses the Penines and it’s one of the “must does” for us and Chyandour.Any Hire company that I would recommend,gives value for money as well as good boats,we did a lot of research before we hired ‘cos we aren’t rich.

OK folks,that’s all for this week,I’ve got to do the dishes while Lisa watches the TV.What a life hey ??? Since last weeks blog we have done 15 Locks and 20 Miles,giving us a grand total of 161 Locks and 179 Miles since we set off in October 2012.