This week we are moored on the outskirts of Alrewas,a place we didn’t expect to see again for a while.We’re only here for the one night so we’ve used our time to visit the National Memorial Arboretum.We were last here a few months after Her Majesty the Queen dedicated the Armed Forces Memorial in 2007.A lot has changed since then but it hasn’t lost any of the atmosphere and it’s still well worth the visit.

Before we arrived here in Alrewas,we had a few days moored at Fradley Junction,having got there last Tuesday after a longish day of cruising from Tixall.Thankfully,unlike the previous couple of days,we didn’t have any rain or snow,though it was still cold.We decided to stay at Fradley because,as we expected,the River Trent at Alrewas was in flood again and,as well as having good boating services,Fradley Junction has one of the best pubs on the network,The Swan. Fradley Junction is where the Coventry Canal meets the Trent & Mersey Canal,it was completed in 1790 and became one of the major junctions on the network.The Swan and what were once warehouses and cottages alongside it,were built in the 1790’s.

The Swan at Fradley with the cottages and warehouses either side of it.A view of the River Trent in flood at Alrewas.This time we could walk to the off side and get up closer than when we were here in December.The canal is to the other side of the boom. 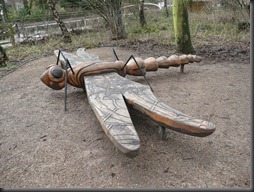 How’s this for a Dragonfly? It’s a seat in the Fradley Pool Nature Reserve which was adjacent to our mooring at Fradley.It’s a great place for walking your dog and there’s a hide for watching the birds as well as various sculptures in wood that are dotted around the site.There’s Foxxie Dog and me as we walked down to see the Trent in flood.We took Foxxie for a walk to have a look at the Trent and to see how high the water was again.Lisa and I had done much the same thing between Christmas and New Year,while on the other side of the river waiting to get to Birmingham.

As you know we have been helping to escort our friends,Janice and Foxxie Dog and their boat Jandai,to a safe mooring but we decided that Fradley should be where we parted company.Other friends,Paul and Kait,would continuing where Paul and Archie had left off on Tuesday and take them on the last couple of legs of their journey from Birmingham.It had been almost six weeks since we had met up with Jandai and,along with the heartache after the first week,we did have some good times,so we parted with no little sadness.We are thankful that we had been able to count Dai as a friend and now we would like to say the same for Janice and Foxxie Dog,we look forward to meeting up with you again in the future.There will always be room on Chyandour for you both.

We didn’t do a great deal during our stay at Fradley,most of our time was spent cleaning and tidying our boats and doing the laundry in the machines provided by the Swan.Though we have our own machine it’s a bonus to have facilities where we can get things washed and dried at a reasonable price,the laundry here fits the bill to a tee,saves the batteries too.On Saturday night,one of the final things we did together was to go for a meal in the Swan and it was excellent,so good in fact,that after Jandai had gone,some of our family joined us for the Sunday Carvery and that too was very good.

Finally,here in Alrewas,I’ve had to go through the periodic humility of having my hair cut.I have a rough idea that it needs cutting when I get the remarks about plaiting from some of my so called friends.You know who you are so no revenge,this time

,but any future references to coloured ribbons could result in a fatality.The thing is,I hate having my hair cut and always have,Dentists I can cope with,Barbers are creatures from hell.

I’ve had Barbers threaten to throw me out halfway through cutting ‘cos it had to be done their way and I didn’t agree.They always made me look like I was wearing a cycle helmet before cycle helmets were invented!!! I’m quite attached to  both my ears too and there have been some close calls there,I can tell you.Lisa would say they no longer work,but that’s not an excuse for disfiguring me and they still look ok.She has cut my hair since we met but it’s not helped any,I still feel I will lose bits I’m still using,as well as “all” my hair.The trauma was even worse today because it hurts to see the local wildlife building nests with your hair when you could still be using it,winter isn’t over yet you know.

Anyway,that’s all for this week.Since our last blog we have done 12 Locks and 16 Miles,giving us the grand total of 146 Locks and 159 Miles.Please take care everyone,bye for now.