We’re now on the move again.We left Birmingham on Friday on the first leg of our journey escorting our friends boat,Jandai,to a safe mooring.Friday night was spent at the Black Country Living Museum,a familiar place to Lisa and I ,having visited a couple of times with hire boats and we know there are nice quiet moorings with good services.

Jandai on the left assisting another friends boat into the moorings at the Black Country Museum and on the right the three of us safely moored.

Saturday night we spent above the top lock of the 21,or the Wolverhampton Flight,to give it it’s name,and surprisingly,it’s a flight of 21 locks.We hadn’t moored there before because it has a bit of a reputation but I felt that we would be safe and so it turned out.OK,it’s a bit noisy as there’s a night club close by,but I was the only one to hear anything,everyone else slept soundly.On Sunday morning some more friends arrived,they are the ones who are going to be taking Jandai to her safe mooring,and together we went down the 21.The journey from the top to the bottom of the flight generally takes about four hours,we did it in two and I still find it hard to believe.There were two boats and eight crew in total and we set off at just before 10 and we were at Aldersley Junction on the Staffs & Worcs at about ten to twelve.A world record?? probably not,but we can hope.It rained every inch of the way down and I think it’s safe to say we were all glad when we got to our intended destination for the night,even though we were a couple of hours earlier than expected.It was lovely to sit in front of a hot stove with a mug of tea and dry out.Today we made a full day of it,it was snowing when we left but stopped about lunchtime and we finally got as far as Tixall,which is just short of Great Haywood.Lisa and I are looking after both boats for the night and then tomorrow we are going to make for Alrewas if we can.That will probably be it for a day or two as the River Trent is in flood and the locks at Alrewas could well be locked again. 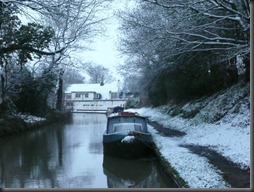 On the left is how things looked this morning when we woke and that’s me on the right,at the tiller,and boy was it cold.

Earlier last week we got out and about as usual and Tuesday we went to the Millennium Think Tank,which is a sort of science museum.It’s full of interactive displays for all ages plus some of the the machinery,cars and aircraft that have been built in Birmingham over the last 250 years.A new display was being built ready for later this month so we have an excuse to go back on our next visit to Birmingham.On Wednesday our first 250 hour service was due,so it was off with the engine covers and out with the toolbox.We were well prepared for this,having bought fuel and oil filters as well as engine oil before we left Trent Lock.It took us about an hour,I guess,and then Chyandour was good for another 250 hours before her next service is due. 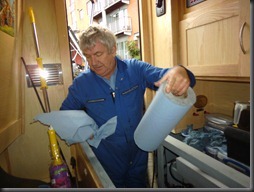 We went for another long walk on Thursday,this time to have a look at a couple of the canal branches off the Mainline and also to see what we could of the old Soho Foundry that was built by Matthew Boulton and James Watt for manufacturing their steam engines.We managed to see bits and pieces of all the places but a great deal has gone with only little bits here and there to show where the Cape Arm and the French Walls branch were.You can just about make out the foundry from the nearby road,with James Watts name painted in large white letters on the wall,and there’s also a blue plaque at the main entrance with the Foundry Tavern opposite. 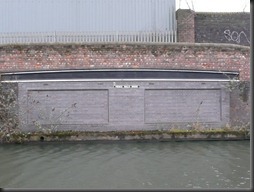 On the left,the only view of the Cape Arm that I could get.The junction has no foot access and the whole arm is surrounded by factories.All that remains of the French Walls branch on the right,just the bricked up junction with warehouses where the branch used to be. 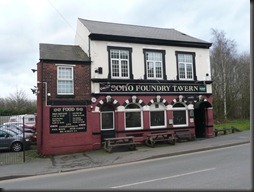 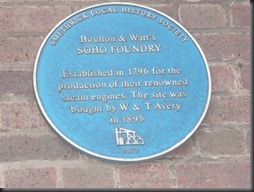 Perrotts Folly on the left and Edgebaston Pumping Station on the right.These two buildings are said to be the inspiration for Tolkien’s Two Towers.J.R.R.Tolkien lived near Edgebaston as a child and these two towers can be seen for miles.

Well,that’s all again for this week.Since our last blog we have done 35 Locks and 36 Miles,giving us a grand total of 134 Locks and 143 Miles since we set off,on our travels,on the 12th of October 2012.Take care everyone.